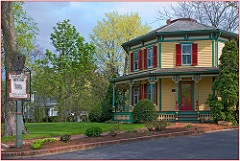 That’s the motto of Barrington: “A great place to live, work, and play!” If you live here, you already know that this is a true statement. If you are thinking about living here, you can rest assured that you won’t regret your decision once you come to Barrington.

There’s a lot of history preceding it, but it was in 1863 that Barrington requested incorporation. The Civil war delayed any action on the proposal for a while. Finally, on February 16, 1865, the legislature of the State of Illinois granted Barrington’s charter.

The Village was doing well, and then a series of fires in the latter part of the 19th century served to change the way the people of the town went about building things. Brick and stone replaced the wooden structures that had burned. Some of those buildings, with occasional updating and cosmetic changes, are still in use today.

The village still had wooden slat sidewalks until they began replacing them with pavement in 1907. Just when the rest of the nation was beginning a severe depression, economically, Barrington had jobs! The Jewel Tea Company built a new office, a warehouse, and a coffee roasting facility in Barrington.

There’s also some infamy involved in Barrington, in case you thought things were just a little too rosy. The “Battle of Barrington” had nothing to do with the War between the States. It was more like the Shootout at the OK Corral. One Lester Joseph Gillis, alias George “Baby Face” Nelson, engaged federal agents in a gun battle on November 27, 1934. Nelson killed two agents, and escaped, but not before being shot nine times. He died on the run, and was found in what is now known as Skokie, Illinois. You can read more details in the Wikipedia entry on Barrington.

The Barrington Historical Society has been diligent in its mission of preserving the history and the culture of Barrington. The Society operates from 2 restored Victorian houses, and behind these buildings are some authentically restored areas such as a blacksmith shop, a barn, a forge, and a one-room schoolhouse.

These are just a few of the interesting facts that make Barrington not only a pleasant, but also a fascinating place to live. If you are interested in purchasing a property, or in selling a property in Barrington, please contact me, Dean Tubekis. My phone number is (874) 809-8070, and we are located at 530 N. Hough St., Suite 180, Barrington, IL 60010. You might want to browse my website, or follow me on Twitter, Facebook, or Pinterest. I can help you with all of your real estate needs!

Click on the links below to take a look at some of the properties we have available right now!