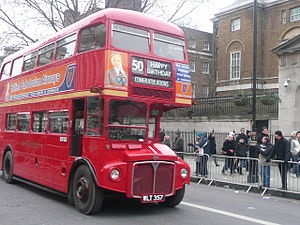 It was a great honor to have been invited once. To be invited a second time is fantastic! If you are in the Barrington area, you will probably already have heard about the invitation to the Barrington High School Marching Band to march and play in London, England. (Actually, the parade is in Westminster, a borough in central London.) The band will be marching in the 2018 New Year’s Day parade, sometimes billed as the largest parade in the world.

The band went to London in 2014, in response to a similar invitation. It was a great experience for the players and the leader, Randy Karon. They must have done something right, because they’ve been invited back. Receiving the invitation this early gives the band time to start planning fundraisers to help pay for the trip. I’m sure the proud residents of Barrington will gladly contribute.

Dressed in his official garb, Robert Davis, a city councilman and former Lord Mayor of Westminster, proffered the invitation personally to an audience in the high school auditorium. It was all very exciting. This is a prestigious offer, and the people in Barrington can be proud of the students who work hard to be their best, and of the leader, Randy Karon, who has spent the last quarter of a century inspiring those students. According to former Lord Mayor Davis, they are careful to “choose only the best”. It was because the band did so well in 2014 that they are invited back.

It’s not an easy thing to march in this parade. First of all, nobody knows how the weather will be. Then, there’s the route which is about 3 hours long. The landmarks along the route include Trafalgar Square, Piccadilly Circus, Parliament Square, and other famous places. In 2014, the band from Barrington was placed behind a dance troupe from Bolivia, and in front of a London-based bagpipe band. How’s that for international blending?

Besides the London “gig”, the Barrington High School band has also marched twice in Disney’s Thanksgiving Day Parade of Bands in Orlando, Florida. They were there in 2011, and in 2015. These are some dedicated kids!

If you are looking for a home, or if you want to list a property in the Barrington area, please call me, Dean Tubekis, at (874) 809-8070, or come to our office at 530 South Hough Street, Barrington, IL 60010. Why not take a look at my website, or follow me on Facebook, Twitter, or Pinterest? I can help you with all of your real estate needs!

Here are some great listings for you to check!